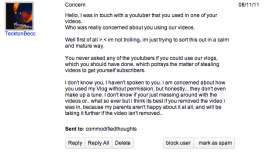 Commodified thoughts is an attempt to explore the musical possibilities of working with a large database of related sounds, namely the human voice, as well as investigating the effects of introducing aleatoric techniques to the Euclidean sequencer. It was inspired by Carmen Hermosillo’s polemic on the nature of entertainment on the internet. Six hundred YouTube vlogs were downloaded and analysed. The analysis picked out percussive transients in the speech and recorded their location and amplitude in a database. Six vlogs at at a time were used to create aleatoric disjointed ‘mashups’ of the originals which were then posted back to YouTube along with links to the original content. Each original source video was left a comment “Your thoughts have been commodified, consolidated and repackaged.” which acted as a breadcrumb trail to tempt their owner into viewing and commenting on the new work. This was probably the most interesting outcome of the enterprise, as opinions ranged from positive encouragement to derision and threats to sue. Some YouTube users wryly thanked me for “taking care of their thoughts for them”, some pointed out their own videos in the collection or sent me new videos to be used while others angrily protested and issued DMCA take down notices. One user created a new vlog and protested that these vlogs had been “stolen” and that I should “give them back”.